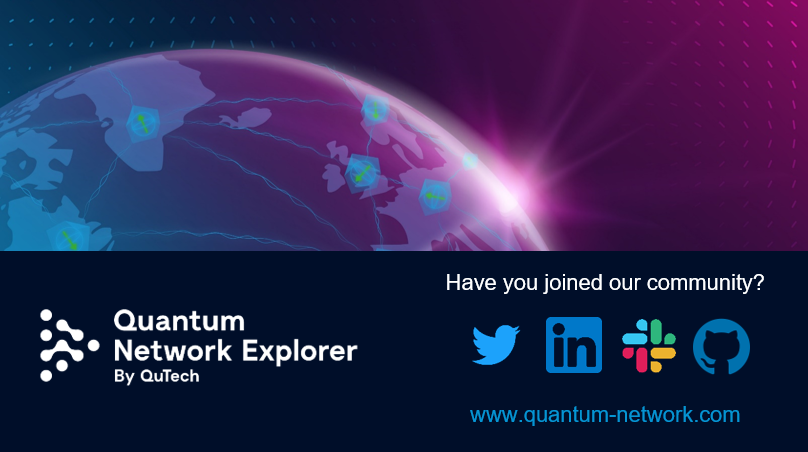 The vision of a quantum internet is to enhance existing Internet technology by enabling quantum communication between any two points on Earth. Such a quantum internet will—in synergy with the “classical” internet that we have today—connect quantum information processors in order to achieve unparalleled capabilities that are provably impossible by using only classical information, such as distributing encryption keys secured by the laws of quantum mechanics, more efficient distributed agreement, or private delegated quantum computation. The first quantum entanglement networks have been realised in a lab including a software and network protocol stack for executing platform-independent applications. In this workshop we will introduce the basic concepts underpinning the quantum internet and take you through developing your own quantum network application running on a (for now) simulated quantum internet using the Quantum Network Explorer platform.

This workshop consists of two parts;

First, a basic introduction to quantum networks. Here, I will introduce the basic building blocks of a quantum internet: quantum bits (qubits), entanglement, and quantum repeaters. I will then explain the quantum mechanical phenomena that enable greater security for communication and how entanglement is a fundamentally new resource for distributed tasks and computation.

Secondly, to illustrate these concepts, I will take the audience through an implementation of a simple Quantum Key Distribution (QKD) application whereby Alice and Bob create a quantum-secured secret key which they can use to encrypt their communication. This will be done in Python using the tools available on the Quantum Network Explorer.

Pre-requisites: You need a machine with Linux and Python <= 3.9 (some of the packages have not been updated to 3.10). You may use the Windows Subsystem for Linux (Bash on Ubuntu) if you have a Windows machine. MacOS is in principle supported, but often causes issues due to certain dependencies that do not work on MacOS. In this case, you are advised to have Linux installed in a virtual machine.

Wojciech Kozlowski studied Theoretical Quantum Physics at the University of Cambridge where he obtained his MSci (2012). He then completed his PhD in Atomic and Laser Physics at the University of Oxford (2016). In his PhD he studied the interactions of quantum light with trapped cold atomic gases and developed theoretical models for the resulting competition between measurement back-action and intrinsic atomic dynamics.

Following his PhD studies, Wojciech decided that he would rather dive into Computer Science. Therefore, rather than following an academic career he went to work as a software engineer in the network protocols team at Metaswitch in London. It is here that he developed his interest in computer networks. During his time in industry, Wojciech was able to learn the basic theory of operation of computer networks whilst gaining practical experience in implementing and running network software.

Wojciech found out about QuTech while attending the IETF 101 meeting in London where the Quantum Internet Research Group at the IRTF was formed. Less than a year later, in February 2019 Wojciech joined QuTech as a postdoc in the Wehner Group. His research work focused on quantum network protocol design and the software architecture for quantum networking nodes. In the meantime he also became a co-chair of the Quantum Internet Research Group at the IRTF. As of April 2021, Wojciech is a Quantum Network Engineer at QuTech. In his new role he works on developing the overall software architecture for quantum networks covering both the data and control plane.