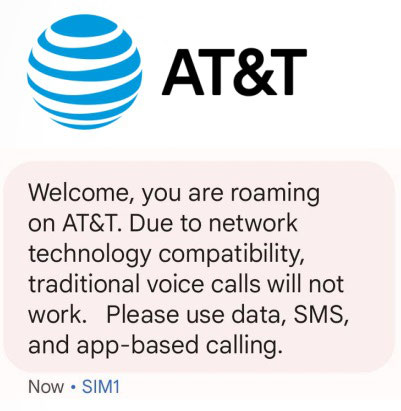 A lack of VoLTE standardisation breaks voice calling globally. Your brand new smartphone may not work because VoLTE is screwed up by manufacturers and carriers.
Voice-over-LTE (4G), voice-over-NR (5G) and voice-over-WiFi have been standardized for years, but now that more and more 2G and 3G networks are shut down by operators, users discover their phones don't work anymore with basic voice calling. The cause is a massive mess in standardization, with a boatload of options and settings and vendors and carriers interpreting it differently, masked by fall-back to 2G and 3G and lack of "international roaming" agreements for VoLTE.
Handset manufacturers decided to implement shortcuts (neglecting parts of the standards) or even worse, implementing white-lists with only mayor operators included, so you cannot switch operators anymore and are up for a big surprise while roaming in another country.
The result: Even your brand new phone might be unable to provide voice calling in one country but work in another. Voice-calling might work if you're lucky, but you cannot reach 112/911, the eCALL system in your car fails after 2G/3G shutdown or you cannot receive an SMS you need for remote Two-Factor-Authentication while roaming in another country.
It's such a disastrous mess, so should we stop the 2G/3G shutdown and get-it-fixed?

This is a tale of a disaster still looming in most of Europe for Europeans, as 2G/3G still works as the fall-back mode of your device. As a result nobody noticed that VoLTE was screwed up.
However many non-Americans roaming with their phones into the USA suddenly learn their brand new phone isn't working for voice-calls, as AT&T has shut down 2G/3G on July 1st 2022.
Problems already did happen to users roaming into countries like India.
Users who buy seemingly the same recent model of a supplier like Samsung or Apple, and think they are safe, might be up for a big suprise too. Months of testing needed per device was considered way too cumbersome and too expensive by many, so at best it was halfway done.
Manufacturers decided to cope with it by curtailing the myriad of options and settings, included mobile-network-code white-lists or implement short-cuts (neglecting parts of the standards).
With white-lists you suddenly are tied to an operator and changing your subscription from a major Mobile Network Operator to an MVNO, makes voice-calling on your brand new smartphone defunct, only allowing data communications working.
The "advice" to complainers is just to use voice-apps, but these don't allow Emergency calls.
eCALL devices built into cars that dial emergency numbers may work in your home country, but fail when driving in another land on your holiday.
Roaming agreements between international carriers have up to now been made only between major operators in large countries, There are merely 50 international VoLTE roaming agreements actually working. If you are from a "small country" like Sweden, you're out of luck in the USA.
Voice-over-LTE (4G), voice-over-NR (5G) and voice-over-WiFi have been screwed up by an unholy alliance of handset manufacturers, carriers, the GSM-Association and IMS-core vendors and standardization bodies, who couldn't decide to settle VoLTE down to a limited set of options and prescribe large scale compulsory plugfests and compatibility tests.
Regulators have looked away, expecting the "magic of the market would resolve all issues".
Some vendors have engaged in favoritism with white-listing or don't deal with MVNOs and MVNEs, as they don't order millions of devices.
This talk explains the cause of the mess and highlights the problems lurking in your brand new device.
It provides real problems, with devices and disfunctional VoLTE, collected in 2021/2022.
We should ask the question whether the announced shutdowns of 2G/3G in most of Europe have to be stopped. Must device manufacturers and carriers be forced to clean-up their act now, and halt their anti-competitive practices and favoritism, before people die as they cannot reach 112/911 during an Emergency?

Hendrik Rood (1965) has worked in telecoms and Internet technology since 1990, after completing his Applied Physics degree with lab works in semi-conductor technology at submicron and nanometer scale.
He designed and helped built his first Internet Protocol network in 1992-1993 and took part in major hacker-events since 1993
He is a consultant with Stratix since 1995 as well as the secretary of the Workgroup Internet Transparency of ISOC Netherlands, which focuses at educating courts, legislators and policy makers about the technology impacts of their policy-proposals with internet tech.